As waves absorb, on average, about 71 TeraWatts (TW) of energy from the wind over the entire ocean1, a sizeable amount of this energy is radiated across ocean basins. Most of it is dissipated into heat on the way but still close to 3 TW reach the shorelines. That energy is dissipated in a narrow strip called the surf zone, which makes it the most energetic area in the ocean.

Storm surge and wave set up of steep cliffs

Large storms on the West coast of France, with significant wave heights up to 14 m, can produce spectacular displays of whitewater and foam. These waves, when combined with high spring tides, can attack beaches and cliffs, producing a wide range of coastal forms. The IOWAGA team is actively collaborating with the GEOMER laboratory in Brest to provide the wave data needed to interpret these geographical features, from 'comet tails' to 'cliff-top deposits'. A recent analysis of water levels recorded on the on the cliff of Banneg, reveal that long period waves excited by swells crashing on the cliff are giving a leg up to these shorter swells that more easily attack the top of the cliff, with water levels up to 4.5 m above the tide.

Efficient and accurate numerical models for the coastal ocean

A key tool for these investigations is the numerical wave model WAVEWATCH III® developped jointly with the U.S. National Ocean and Atmosphere Administration (NOAA). We are in particular contributing to this software the unstructured grid capability, together with A. Roland from T.U. Darmstadt, and various physical parameterizations. This type of numerical wave model solves a radiation balance, in which we are only concerned about the energy of different components of the wave field and the evolution of these energies in space and time. 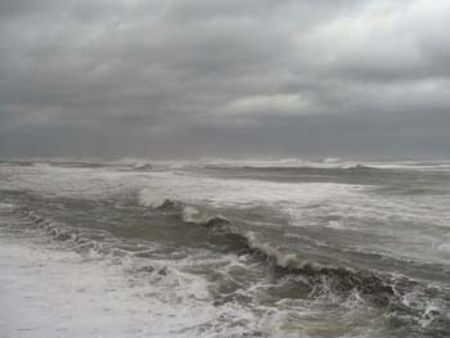 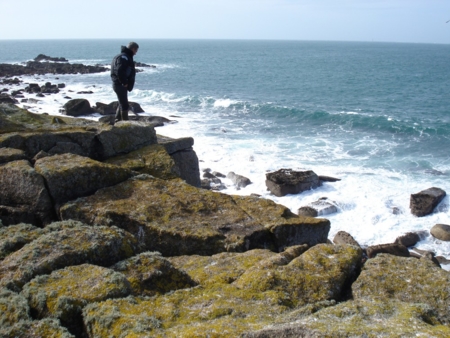 Viewed from the top of the cliff, small waves are crashing on the West coast of Bannec island.